This week, the Politically Speaking trio welcomes back state Sen. Scott Sifton. The Affton Democrat won election to the Missouri Senate in 2012 in a hard-fought race against then-Sen. Jim Lembke, R-Lemay. 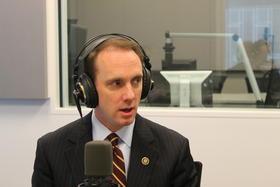 Most recently, Sifton, an attorney with Husch Blackwell, made waves in the Missouri Senate with his filibuster during the fall veto session of legislation mandating a 72-hour waiting period for abortions. He’s also been part of a bipartisan group of lawmakers calling for curbs on meals, travel and entertainment paid by lobbyists.

During the podcast, Sifton said: